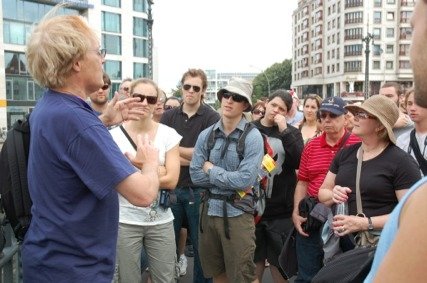 While I often get tired of some of the repetitiveness that comes along with travelling, I don’t think I have ever REALLY regretted taking a walking tour. And neither should you. Here are a few reasons as to why you should at least research potential walking tours for each destination

You get your bearings:

While I’m not going to rank these reasons, I think getting your bearings is arguably the most important part for each destination. Any reasonable walking tour will give you a good outline of the historic areas in each town (including where to go). During your remaining time you will always have a good idea of where you are and where you should consider going.

I found that the walking tours really helped me in mapping out my stays in cities like Milan, Frankfurt, Lisbon, and Porto.

You gain a new appreciation:

During my trip, I think I saw 20 different cities and towns. Not every destination impressed me at first. Once I did a walking tour in the morning, I was able to learn more about the culture in an outdoor setting (rather than taking an audio tour in an over priced museum). You learn things that you wouldn’t in any other setting, and your guides play a huge role in that.

I’ve been to Frankfurt on 3 occasions now (about 9 days total). I never had much to say about the city and only ever viewed it as a major business and transport hub. On my second last day in Frankfurt (this fall), I took a walking tour that was suggested through the hostel. By learning more about Frankfurt’s history and musings, I became a lot more impressed with the city and wished I had spent my time there more wisely.

I think this goes for everyone, especially solo travellers. Sometimes you strike a good connection with your guide. But in most cases you will end up meeting someone from another part of the world. While it becomes repetitive for some, I am always interested in the pre-tour introductions when everyone shares who they are and where they are from. In many cases, a lot of people will be from the same hostel as you and the walking tour gives you a good foundation to build a friendship off of. You’ll have everyone wishing they were in on the inside jokes (or not :p ).

In every destination in which I took a walking tour I met someone new. In each of those cases, I still talk to those people today! I’ve met some amazing people 🙂 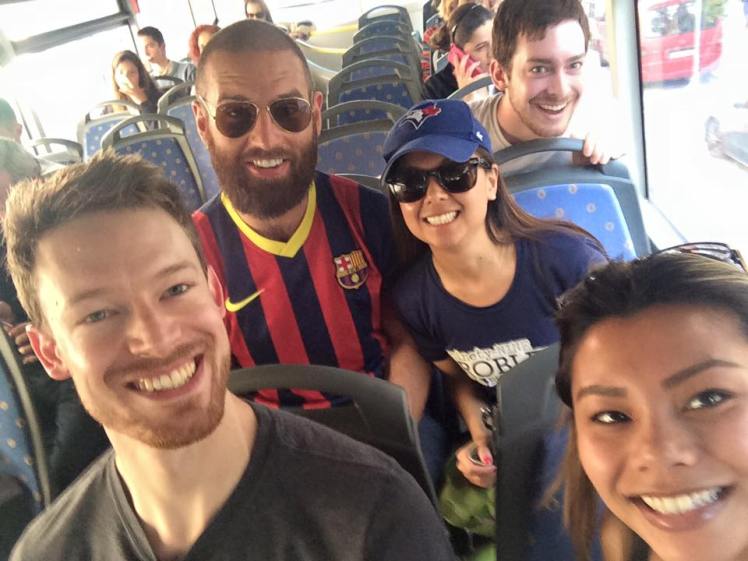 Heading to the beach with Evan(Edmonton),  Jo(Toronto), Zach (North Carolina), and Mary(Calgary). I met the guys in Lisbon, one of them from a walking tour (I would think). I met Mary and Jo during introductions of a morning tour in Porto. P.S.- Evan has the beard and I’m the one alone in the back… XD

While not every walking tour is AMAZING, I found that each one introduced me to a spot I would have missed otherwise. At the same time, you are introduced to some of the best eateries in town, and most of them are off the tourist track*. Eating currywurst with my guide in Berlin, seeing an amazing sunset in Porto, and getting the finger in Milan; these are just a few little (but interesting) things I would have missed had I not done the tour.

Eating at a local pub in Berlin

*-Be careful with certain tours. Some may point you in the direction of a specific place. This probably means they are getting a kickback and you might not even be saving that much money. Don’t hesitate to grill your guides on their suggestions. I didn’t have that problem. In fact, I went back to certain restaurants three or four times because the food was so good (and affordable).

Undecided on which tour to take? You can alleviate that in a few ways:

-Do your research before hand. Try researching before you leave, read blogs, ask friends, and even poll your room-mates once you are there.

-Meet the guide before hand. Show up early to the meeting point or talk to your guides if they come to your hostel. If they are really pushy or seem uninterested in your questions they probably aren’t worth spending 2-3 hours with.

Lastly, don’t be afraid to leave the tour. Even on the tours that were amazing, I noticed travellers leave at varying times. If you want to tip the guide before you cut out, get to them during one of the transitions. And please don’t make a big deal about your displeasure with the tour while we try to listen to our guide, just walk away. None of us care!

4 thoughts on “Walking Tours: Just Do It”